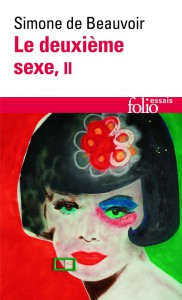 Interesting, and I read it to the end... but to be honest, I prefer her novels. One obvious criticism is that this isn't really about women, it's about FRENCH women.

So I was talking with a female friend a couple of weeks ago about why men are so fascinated with women's breasts. If you're male, you'll know what I mean. If you're female, you've probably noticed men staring at this part of your body, and maybe wondered why they were doing it.

De Beauvoir, I recalled, spent some time discussing the issue in Le Deuxième Sexe. If I remember her argument correctly, it went something like this. Men want women to be useless, and feel threatened by any form of female activity. Breasts are the most useless part of the female body (like, they're not nearly as useful as arms and legs and stuff), so they're the part men like best.

With all respect to the great Ms de Beauvoir, I simply can't buy this. It's ingenious, but it sounds like nonsense to me. I'm much more inclined to believe the account I have seen in a couple of evolutionary biology texts. Most male primates focus their sexual attention on the females' buttocks. But these primates also go around mostly on all fours. When humans began walking erect, women suddenly looked quite different. Some of the neural wiring got shifted around, and the circuitry which used to trigger on female buttocks now triggered on female breasts instead.

But what do I know? I must admit that I can't think of any very objective way to test either theory. Anyway, feel free to answer this poll!

OK, I can't yet think of any objective way to test the de Beauvoir theory against the evolutionary biology one. But it seems to me that you can at any rate be objective about the breast-feeding hypothesis. I'd use an eye-tracker, show both male and female subjects pictures of women, and measure how much time each subject spent looking at breasts. Then I'd see if there was a correlation with whether or not the subject had been breast-fed.

If you can get funding to do this experiment, please mention me in a footnote or something.

Incredible. Two minutes on Google, and I find someone's already done almost the experiment I suggested. I might write to Drs Rupp and Wallen, and ask them what they think.

I couldn't resist... just wrote to Dr Rupp. Will post her reply, if I get one. By the way, here's a brief nontechnical summary of the article, from the Kinsey Institute website:

Kinsey Institute researcher Dr. Heather Rupp is the lead author in a new study analyzing the viewing patterns of heterosexual men and women looking at sexual photographs. The results are not what you might expect.

Researchers hypothesized that women would look at faces in the photographs, and men would look at genitals. Instead, they found that the men were more likely than the women to look at a woman’s face before other parts of the body, and that men and women did not differ in their overall time spent gazing at pictures or in their subjective evaluations of the sexual attractiveness of the photos. The photographs were of heterosexual couples in sexual activity.

“The men looked at the female face much more than both groups of women, and women who were not taking the pill spent the most time looking at the genitals,” said Dr. Rupp. The data also showed interesting differences in attention that may be explained by hormonal state – the women on the pill paid more attention to contextual elements of the pictures, such as the clothing and background scene than did either of the other groups. These findings may help interpret previously reported sex differences in neural activation in response to similar stimuli.

No answer as yet from Dr Rupp, but it seems to me that there are possibilities for adapting her experimental methodology so as to investigate de Beauvoir's hypothesis empirically. The starting point, as before, would be to use an eye-tracker to see how much time a large sample of men spent looking at women's breasts. Though I wouldn't, as in her 2007 paper, present visual stimuli which showed couples having sex; I think it would be more natural to show pictures of women on their own, with their breasts more or less concealed by clothing. The standard complaint, after all, is "undressing with their eyes".

Having got the timing figures, I would interview the men to get details on them and their current and past partners. I would argue that, if you're a man who finds female activity threatening, then it should to some extent to reflected in your choice of partner. For example, I'd expect it to be less likely that a man who is afraid of female activity would have a partner with a successful career, who made more money than he did.

De Beauvoir's hypothesis, I thus claim, predicts that men who have a long-term association with an active, successful partner would spend proportionally less time looking at breasts. I'd be very interested to find out if that was true! I can see the experimental design being difficult, however. If the subjects understood the point of the experiment too soon, I wouldn't trust the results at all.